When I first bought my place in Tassie I never gave any thought as to how I would actually afford to build anything, back in 2007 the plan was to sit back and wait until something changed (a lotto win possibly) well after 9 years and a lot of challenges I have had the power and phone connected, built a shed and added a tank to provide water, recently I have installed a septic system and most of the waste water plumbing.

As far as the cabin itself goes I had a local builder excavate the footings and complete the stumps and that is where my building project is currently. With only one more trench (to connect the power from the shed to the cabin) I am now ready to start the actual building process.

After completing the ‘Timber House Framing‘ course at TAFE I feel quite prepared (and excited) about actually building, with my helper Peter the frame is something that should be able to be done over a couple of weeks so it shouldn’t take too long to see some progress. While I’ve been working out the costs for framing I’ve also been thinking about the other elements that make up the exterior, cladding and windows are the two big ones but several other details will define the final look of things. The exterior cladding is something I have spent many hours thinking about, and it is probably one of the most important things aesthetically, the final (exterior) colour is not something that I can change easily and depending on the material I might not be able to change it at all !

When I selected the colours for the shed I always expected that the cabin would be of similar colours, that of course was fine for something without windows but as always there was the issue of that ‘third colour choice’. 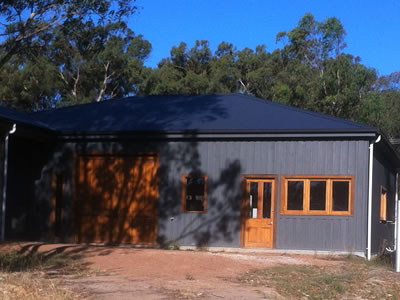 Quite some time ago I drove past a ‘shed conversion’ that caught my eye, with two different colour greys and stained timber for the windows and doors I finally thought I was getting somewhere…

That was of course until the idea of using a green inside the cabin came along which then prompted my thinking into how to introduce this colour to the outside.

The easiest solution would be to accessorise the outside with something like a planter or other ‘object’ which could be easily removed or repainted as required, a much bolder option would be a feature wall that smacked you in the eye visually as you approached and allowed for a ‘love it or hate it’ reaction… I’m hoping to find a bold solution that I can also change if the ‘hate’ gets too much.

There are so many things to consider with the cladding that colour is almost a secondary consideration… right from the start I decided that I would have ‘whatever I wanted’ regardless of the cost, as my project was small how much variation could there be when the quantities were also small. Without considering handcrafted ‘bespoke’ lining boards the options varied widely, corrugated iron, fibre cement sheet (HardiePlank), timber or rendered coatings. My first criteria was that it had to be something that I could work with myself, application by specialist trades was not something that would ever be easy in Tasmania.

Even though I liked the idea of corrugated iron I didn’t fancy having something that looked like I had built a second shed. This lead me to start looking at timber in all it’s forms, weatherboards of various timber and a couple of options of ‘manufactured’ boards. It had also been a consideration that the environmental impacts of my building would be important, not to the point of influencing my choices over everything else but important just the same. I was soon to discover that the variations in price were significant, a 300% difference between the options just in timber products ! While attending a Home Show in Melbourne I learned of a product called Weathertex, an Australian product, made from Australian hardwood that only used the natural gum from the timber as a binding agent, this product was something I could be happy about for many reasons. The Weathertex product comes in various sizes and a couple of different profiles, at this stage I have selected the ‘Woodman’ profile that will allow for vertical lines on the boards and a reasonably natural timber look.

Now that the cladding is sorted I can think about the windows which are the subject of another post as the options for glazing are not as clear as you would think… (pun intended).